From Brant Clifton at The Daily Haymaker:

I actually got an email today from someone (1) attacking me for NOT covering the ”internal lunacy” at NCGOP, and (2) wondering where The Haymaker’s coverage has been on all of this.  Seriously. Well, we were the first and – I think — only media source to tell you about the gathering of the lynch mob on Palm Sunday.    The conspirators leaked a crazy story to state-run media about Hasan “The Hacker”.   They couldn’t possibly move forward with that crazy story, could they?  Well, they DID:

From: North Carolina Republican Party
To: Interested Parties
Date: 3/20/16
RE: No Confidence, Censure and Restriction of NCGOP Chairman

The North Carolina Republican Party (NCGOP) Central Committee, in its duties to oversee the day to day management of the Party and to protect the Party’s integrity, passed a formal resolution of no confidence in NCGOP Chairman Hasan Harnett. Further, the Central Committee censured him forrecent actions and pl aced severe emergency restrictions on his duties, pending a full review of charges of gross inefficiency by the NCGOP Executive Committee.

Harnett was censured for actions deemed harmful to the North Carolina Republican Party including making false and malicious statements about other Republicans and staff.

In adopting A Resolution of No Confidence, Censure and Restriction, the committee reviewed what it believes to be gross violations of the Party’s rules (Plan of Organization), including the following:

The Central Committee passed this resolution with overwhelming support with only two members in opposition.

Has pettiness ever been so blatant and in-your-face?  (Probably not since junior high.)

What is this really all about?  You know, there is always an ulterior motive to everything done by political types in the big city of Raleigh.

Overshadowing this is some complaining about Harnett not meeting fundraising goals — after only NINE MONTHS.  Well, the legislature created those affiliated committees which take “donations” without involving the party.

Insiders tell me that Robin Hayes and Claude Pope regularly had to go to big donors to get help paying the light bills at HQ and meeting payroll. I am told the last decent fundraiser to hold the job was Tom Fetzer.

And the fundraising Dallas Woodhouse is credited with?  It had more to dowith a half dozen legislators taking money out of the party account a few months after Harnett was elected, and returning it a few months into Dallas’s term as executive director.

Here is the list of the lynch mob members.   There are more grounds to fire THEM and Dallas Woodhouse than there are against Hasan Harnett.  (Watch out vice-chairman Nix.  You’re next.)

I stopped giving a flip about the GOP a looooooooong time ago.  I am all about freedom from government tyranny and the preservation of what is so good about this state and this country. If you still care about the NCGOP,  you need to storm the barricades and get rid of all of these lowlifes.  These parasites are aiding and abetting the corruption and bureaucratic over-step that are  making it harder and harder to make a living and raise a family in this great state and country.

I don’t know Hasan Harnett. He seems like a pretty good guy.  He may not have been the perfect choice for the job.  But the establishment, who backed his opponent Craig Collins, has had the long knives out since the last votes were counted in June.  Hasan was elected by the people. And he doesn’t deserve the harassment he’s been subjected to since Day One.

(from The Daily Haymaker)
It appears that several members of the NCGOP Central Committee and various other muckety-mucks got together for a group text session: 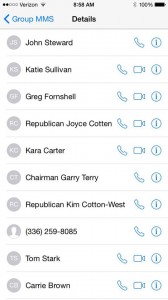 The content of the text screenshots we received indicate that executive director Dallas Woodhouse is much more than an innocent bystander in the whole effort to fire party chairman Hasan Harnett: 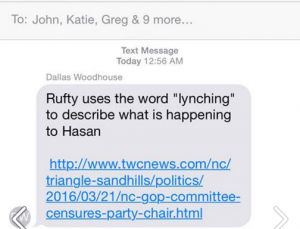 I did too.  It’s pretty accurate.  It looks like Dallas’s co-conspirator, 9th district GOP chairman John Steward, is being manhandled by auto-correct.  “Dance” — I am going to wager — should be “Dallas.” “State” — I think — should be “date”.  Or perhaps Steward could be functionally illiterate.  (I’ll give him the benefit of the doubt.) 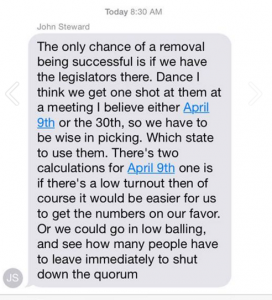 BY JIM MORRILL (quoted from the Charolotte Observer)

There’s been a lot of talk about a contested Republican convention in Cleveland this summer. But there may be one closer to home.

That would be in May, when North Carolina Republicans hold their state convention in Greensboro.

And Hasan Harnett expects to be at the podium.

Harnett has been under fire since the state party’s Central Committee voted Sunday to censure him. Its resolution of no confidence included a litany of eight offenses “deemed harmful to the North Carolina Republican Party.”

Among other things, they included a dispute over the cost of attending the state convention.

Now, less than a year after Harnett was elected the state party’s first African-American chairman with support from grass-roots activists, some party leaders are trying to oust him before the convention.

But Harnett plans to stay.

“I am the elected chairman,” he said Tuesday. “And despite holding back tears and despite having no access to my emails … and despite being hit by baseless attacks and unrelenting assaults, I was elected to lead and serve.

“And at this time, the chairman still calls for unity. And the chairman will still lead the party accordingly.”

The conflict between Harnett and other officials has split the state party, or at least the activists who pay attention to these kind of things.

Efforts by party officials to force out the chairman have already begun.