Note:  This is a post from the Webmaster, not Chairman Harnett

Did Scott Cumbie come right out and say “you don’t matter”?  No, he did not.

However, in his haste to malign Chairman Harnett, he might have inadvertently let a but too much truth seep out.  In a recent Facebook Note titled “A Resolution of No Confidence”, Cumbie said the following: 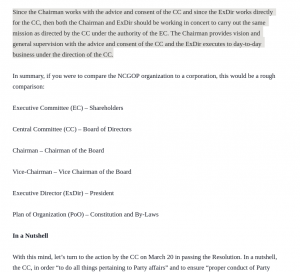 In making his case against Chairman Harnett, he likens the NCGOP Organization to a corporation, and describes the organization as follows:

Can the reader see what is missing from this?

It would appear that in Cumbie’s view, (having been designated as “shareholders”) the Executive Committee “owns” NCGOP!

I don’t see how else to read it.  At best, Mr. Cumbie is misinformed regarding corporate structure.  At worst, he confirms what many of us “little people” out here in the grass roots feel – we don’t matter.

Furthermore, the astuste reader will note that Mr. Cumbie places the Central Committee above the Executive Committee.  This is contrary to the Plan of Organization, which says:

The Committee shall formulate and provide for the execution of such plans and measures as it may deem conducive to the best interests of the Republican Party. It shall approve an Auditing Committee of at least 3 Members, 1 of who shall be a Certified Public Accountant, to conduct a yearly review, as described in Article VI, Section E; adopt a budget; and have supreme management of all affairs of the Party within the State. (speaking of Executive Committee on page 19, emphasis by author)

It may delegate such duties as it deems proper to the State Central Committee. (ibid)