Rather than post the entire story here, I’m going to just quote portions and respond.  A link to the original News & Observer story is below. 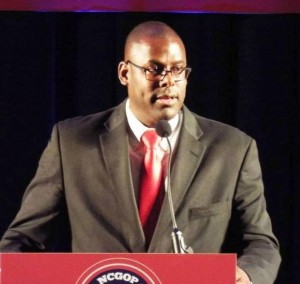 Harnett says the state convention delegate election in May is part of the reason why members of the party’s Central Committee are trying to oust him. If no presidential candidate enters the July national convention with enough delegates to be nominated on the first ballot, many delegates would then be free to support any candidate on subsequent ballots.

Harnett said he’s concerned that establishment forces might try to elect delegates for Donald Trump and Ted Cruz who won’t support them after the first ballot.

“There are grave implications that are going to take place based on who the delegates are,” he said.

Indeed.  Could there possibly be a bigger or more powerful motivation to unseat the duly-elected Chairman?

Harnett was elected last June by the party’s Executive Committee, which includes hundreds of GOP leaders from across the state. Gov. Pat McCrory, U.S. Sen. Thom Tillis and many other Republican elected officials were backing another candidate for chairman.

Might this possibly be another motivation to unseat the duly-elected Chairman?

Harnett ran for chairman on a platform of lowering fees, and he said a higher fee will make the convention unaffordable for grass-roots Republican activists. He argues that higher attendance will result in national convention delegates who best reflect the wishes of GOP primary voters.

“I’m here to speak up on behalf of ‘we the people,’” he said, “when a small handful of individuals are trying to control every move.”

Which I am sure is just one of the reasons the Chairman has such broad support from the grass roots.

The rift between Harnett and Executive Director Dallas Woodhouse first became public earlier this month when Harnett’s email account was shut off amid what Woodhouse described as a “security” problem.

We have started to provide evidence that the story about the “security problem” is a lie, and will continue to do so.  Read more here.

(Garry) Terry said the party has hired armed security guards to keep staffers “safe” at the Hillsborough Street headquarters since Harnett was banned from the building.

The party’s attorney, Tom Stark, said he’s been investigating allegations that Harnett ordered someone to hack into the party website to change details about the June convention. Stark said he has not finished the probe yet but has found evidence that “suggested that there’s someone out there that meant to cause damage” to the website.

As readers may be aware, we have some expertise in this area.  Every website we have ever owned, managed, or administrated has been attacked in one form or another.

In fact, even this very website – NC4Hasan.com – has been the target of such attacks.  Do we blame Messrs. Woodhouse and Cumbie and their cohorts?  No.  We examine the server logs, find the source of the attack, and usually just wind up blocking a range of IP addresses in China or Russia.

In our opinion, those defending the Central Committee need to drop this line of attack, unless they have much better evidence than we’re aware of – the statement by someone who has deep connections to those behind the attempted ouster.  Perhaps it’s the best thing they have.