State GOP’s first black chairman is barred from headquarters, cut off from accounts after pushing to cut convention fee 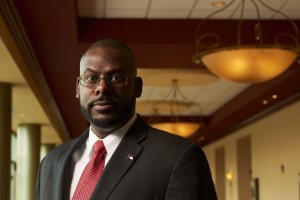 RALEIGH, N. C.—An outsider who was elected chairman of North Carolina’s Republican Party against the wishes of its leaders is in a feud with party brass—a fight that mirrors tensions in the national GOP and is hampering party activity in this swing state during an election year.

Chairman Hasan Harnett was barred from party headquarters in Raleigh last week and cut off from GOP email and other accounts after pushing to reduce the cost of a ticket to the party’s May 6-7 convention to zero from $90.

Mr. Harnett, the state party’s first black chairman, said the convention fee amounts to a “poll tax,” and that he was trying to fulfill his campaign promise to make party involvement more attractive. “This is a fight for the movement that’s going on all over this nation,” he said. “People are sick and tired of being bullied by the small few who control everything.”

The North Carolina GOP’s central committee censured Mr. Harnett on March 20, citing eight “gross violations” of party rules, including advertising unauthorized fees for the convention, and wasting staff and volunteer time. The committee is circulating a petition that is a procedural step toward Mr. Harnett’s removal.

Mr. Arnold said he voted for Mr. Harnett for chairman last June over a better-known candidate endorsed by Gov. Pat McCrory and U.S. Sens. Richard Burr and Thom Tillis. Since then, he said, “it’s been one disappointment after another.”

Party leaders say Mr. Harnett, a motivational speaker and a former Democrat, has failed in the traditional chief duty of the chairman—to raise money. On his own, Mr. Harnett raised $37,000, which they say covers roughly one month of the party’s operating budget and nowhere near the costs of holding a convention or mounting a unified campaign in presidential, gubernatorial and U.S. Senate races in November.

Mr. Harnett said he raised considerably more than $37,000, if contributions raised by staff members are included. He said he has been given little autonomy and scant access to resources like party records, which set him up to fail.

It isn’t clear that the move to oust Mr. Harnett will succeed, as it will require a series of votes among hundreds of party leaders over the next month, Mr. Arnold said.

“Things are always a gamble,” Mr. Arnold said. “But we want to make sure people understand where we are.”

Mr. Harnett said he wouldn’t go quietly, even though he knows the fight is ugly. “Who likes to see Republicans eat their own?” he said.

The tension in North Carolina between the party’s establishment and grass-roots activists mirrors a dynamic at the national level that has propelled businessman Donald Trump and Texas Sen. Ted Cruz to the top of the GOP primary heap ahead of more mainstream candidates, said Michael Bitzer, a political scientist at Catawba College in Salisbury, N.C.

The fight matters, Mr. Bitzer said, since North Carolina is a Republican-leaning swing state that was carried by two points by Mitt Romney in 2012 and by less than one point by then-Sen. Barack Obama in 2008. “If Republicans don’t win North Carolina, how does the Republican ticket win the White House?” he said. “If you’re facing a competitive environment, public spats are not what you want,” he said.

Party leaders are hoping to force Mr. Harnett out before May’s state convention, which has outsize significance this year because of the selection of delegates to this summer’s national GOP convention in Cleveland. Mr. Trump won the largest number of delegates in North Carolina’s primary in March, with Mr. Cruz coming in second. It is possible that delegates to the national convention could ultimately choose the nominee if Mr. Trump, the front-runner, fails to win enough delegates to clinch the nomination outright.

Some North Carolina GOP leaders say they had to censure Mr. Harnett now to avoid confusion over the way the state convention is run. If the process of selecting delegates for the national convention is compromised, they say, the legitimacy of the state’s delegation could be challenged.

A party spokesman, Scott Cumbie, said Sunday that the censure was the result of performance issues, and not related to the timing of the convention.

Mr. Harnett cites the importance of the national convention as one reason he is fighting to stay. The North Carolina GOP needs to send delegates who will stay loyal to Messrs. Trump and Cruz in the event of a contested convention where other names could emerge, he said. If the state convention is dominated by the traditional wing of the party, voters who chose Messrs. Trump and Cruz could “be disenfranchised by people who represent something totally different,” he said.

Many Republicans see the party infighting as an esoteric issue, and say the rank-and-file members are clearly enthusiastic about November based on the record primary turnout. Allies of Messrs. McCrory and Burr say the race is a distraction, but not a hindrance.

“We have no concerns about the party’s ability to work through its current issues and still be in place to play a major role in supporting all the party’s nominees,” said Chris LaCivita, chief strategist for Mr. McCrory.

Harnett allies say traditional GOP leaders in North Carolina are tone-deaf. “The grass-roots, Tea Party conservatives in the state are really, really angry,” said Eric Haynes of Clayton, N.C. “I feel like they don’t want us in the Republican Party.”

Write to Valerie Bauerlein at valerie.bauerlein@wsj.com